This publication is available only in English.

After the heady days of the 2000s, which were marked by the commodity boom and China's massive appetite as it became the largest producer and consumer, the steel sector is finding the aftermath of the party difficult. Eight years after the 2008 crisis, it is still suffering from significant overcapacity. The structural slowdown in the Chinese economy is obviously one of the main reasons for this development, but other factors are also at work - including the contraction and tertiarisation of activity in the rest of the world and the correlation of steel prices with other non-renewable commodities, which are also falling.

Against this backdrop of sluggish demand, China’s steel production capacity increased from 660 million tonnes in 2008, to 1.12 billion in 2015. The country is therefore flooding the rest of the world with its surplus steel, at the risk of causing bilateral tensions, as each country is concerned about protecting its national industries.

Given listless domestic demand and foreign competition, financial problems are piling up for companies in this sector, which are among the most highly leveraged and least profitable in the world.
After the 2.2% fall in 2015, global steel production is expected to contract by a further 2.5% in 2016, according to Coface. The first reduction in Chinese production capacity (of 40 million tonnes in 2015) and the very difficult situation encountered by steel manufacturers, are confirming this scenario.
Steel demand is likely to remain sluggish in 2016 (0%), following a fall of 2.5% in 2015, due to the Chinese effect. But there are glimmers of hope in the longer term. Coface expects global demand to grow by 1% in 2017 and then by 2.5% on average over the following years, thanks to the positive outlook for urban population growth in emerging countries.

Steel sector: produce at all costs? 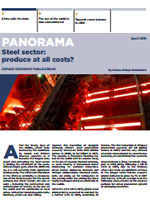 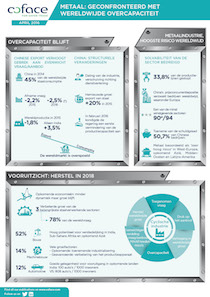