This publication is available only in english.

The Czech Republic is back on fast track. After falling into recession in 2012 and 2013 due to sharp fiscal consolidation and sovereign debt crisis in the Eurozone, the economy regained momentum reaching solid growth rate of 2.0% in 2014 and should gain speed with 2.5% growth in 2015, according to Coface forecast. The improved outlook for the Czech main trading partners in the Eurozone has translated into growth of exports which are responsible for 84% of the country’s GDP. A significant part of Czech exports is driven by its automotive industry which arouses to be a country’s specialty. Nevertheless, the domestic demand plays a sizably role in the Czech economic growth, especially now with positive developments on the labour market contributing to rising private consumption.
The first part of the Panorama considers the Czech Republic as a manufacturing hub for German and other European investors thanks to relatively cheap and high skilled labour force, geographical proximity to core markets, solid economic framework and fair business environment. In return for its openness and strong foreign manufacturing presence the economy is quite dependent on European markets, a few industries and global groups.
In its sectorial part this Panorama focuses on automotive and retail sectors. The automotive section especially highlights the manufacturing of passenger cars, with VW’s Skoda and foreign brands making the Czech Republic the 13th world biggest producer of cars. The paper also investigates if it is a result of attractive labour costs or workforce skills. Whereas
the automotive industry produces mostly for exports, the retail sector is driven by domestic demand. On one hand retail is benefiting from increased private consumption but on the other it is subject to fierce competition and low margins.
The last part of the Panorama looks into risk assessments for main sectors of the Czech economy. Although the country is not trading significant volumes with Russia, the transport sector is impacted by deteriorated trade in the east direction due to its wide exposition to international services. The dependence on Russian oil and gas as well as ongoing geopolitical risks impact many businesses regardless of sectors. Conversely, the faster pace of Eurozone growth rising from 0.9% recorded in 2014 to 1.3% forecasted for 2015 will contribute to clearer opportunities for several sectors.
In a context of accelerating growth Coface risk assessment for the Czech Republic (A4) has been under positive watch since January 2015. The main reasons are the European automotive market recovery, a better use of EU funds leading to a rise in public investment, the solid anchorage of the Koruna to the Euro which will facilitate exports to extra Eurozone countries, and sustained household consumption thanks to rising employment and fiscal relaxation. 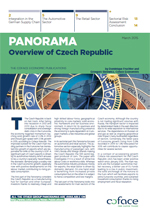