THE SIGNS FOR GERMANY’S FURTHER ECONOMIC DEVELOPMENT ARE PROMISING, WITH A HIGH LEVEL OF STABILITY.

Only available in English

Coface’s expectations for solid growth therefore come as little surprise. This year’s gross domestic product is expected to grow by 1.8 % (seasonally adjusted and corrected for working days). Growth for next year, at 1.7 %, will only be marginally smaller. Since 2015, Germany’s economy has been growing faster than the potential of 1 to 1.5 % set by the German Bundesbank and several research institutions.

The primary growth driver for 2017 will once again be private consumption, mainly fuelled by the country’s record-high levels of employment. Consumers’ purchasing intentions will gain additional impetus, although less so than in 2016, due to lower increases in real wages resulting from rising inflation.

The main focus for 2017 will be on the political arena, with presidential elections in France and the Bundestag elections in autumn. The five federal state elections this year are considered important indicators for the upcoming federal elections and it can be expected that the future Federal Government – whatever its colour – will be less powerful than the current “Grand Coalition”. This will restrain reforms to a minimum level.

Risks for the German economy could also occur on the export side. Global trade is only expected to show moderate growth in 2017 and specific risks are lurking in some of the major target countries for German exports – such as the forthcoming Brexit and the cooling down of the Chinese and US economies. Insecurity could also rise in the aftermath of the US presidential elections. German exports will only grow by 2.3 % in 2016 and 3.4 % next year.

In this environment, Coface forecasts that the downward pressure on insolvencies will continue, with the fifth year in a row of record lows in 2017 (falling to a volume of around 21,000). Nevertheless, this downward trend is expected to continue at a slightly slower pace. After decreasing by 5% this year, Coface forecasts a further decline in bankruptcies by 4.2 % in 2017. Despite the positive outlook, the amount of outstanding claims in insolvency procedures could rise further, as several sectors, especially large.

DOWNLOAD THE PUBLICATION "GERMAN ECONOMY IN 2017: STABLE, BUT NOT STAID" 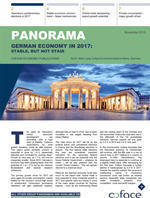