The UAE, the most diversified economy within the Gulf region

Although the hydrocarbon sector remains the backbone of the UAE’s economy, the large contribution made by non-hydrocarbon activities to gross domestic product is mitigating the effects of lower energy prices on economic growth, according to the latest Panorama, a Coface economic publication. For several decades, the UAE has been investing in infrastructures, transportation, financial services, trade and construction, in order to increase the level of diversification in the economy. This diversification has become especially important since mid-2014, with plunging oil prices. The share of non-hydrocarbon sectors in GDP increased to around 75% in 2015, up from around 65% in the mid-2000s.

“The United Arab Emirates’ economy is the most diversified within the Gulf region” said Seltem Iyigun, Coface MENA economist and author of the report. “The country’s relatively high level of economic diversification has made it less vulnerable to the shock in oil prices. Diversification efforts have helped the UAE to build up solid financial buffers that allow the government to continue supporting the economy’s non-hydrocarbon activities such as real estate, construction, trade, retail and tourism”.

In addition to its diversification, the UAE’s safe haven status, its political stability and its resilient financial system have also helped the country to limit the negative effects of lower energy prices. “The UAE remains a very attractive economy for international investors” added Seltem Iyigun. “Its favourable business environment benefits from high productivity, excellent infrastructures, strong connections to international markets and a dynamic private sector”.

Although lower oil prices dampened investor sentiment at the end of 2015, household consumption remained solid, on abundant liquidity, low interest rates and continued tourism inflows. Loans to the private sector increased by 8.5% in February 2016, compared to a year earlier. The country’s economic diversification is supporting this outlook, as the slowdown in the oil sector has had less impact on employment levels.

Still, retail and tourism are the country’s key sectors - but they are facing some challenges.

According to Dubai Chamber, retail sales in the UAE reached Dh173 billion in 2014, more than 6% higher than 2013 sales. Total household spending in 2016 is forecast to reach Dh267.1 billion in 2016, up from an estimated Dh241.8 billion in 2015. High levels of disposable income and a large consumer base of wealthy local residents, expatriates and tourists have supported this growth.

Nevertheless, the rising cost of rents is narrowing retail profit margins and a continued decline in oil prices could destabilise retail investments in the long term. Banks are also facing deteriorating liquidity conditions and dollar shortages, as government deposits in the banking system have dropped following the fall in oil prices.

UAE visitor spending totaled US$23.5 billion in 2014 and US$26 billion in 2015 - the equivalent of 60% of all service exports and 5.4% of all exports including goods and services. This is forecast to increase by 3.3% in 2016, as the UAE is expected to attract more than 15 million foreign visitors. In order to support the growth of mid-range hotels, the government has decided to waive the 10% municipality fee (for an initial period of 4 years from the date of granting construction permits) for properties with construction beginning between 2013 and 2017. Tourism investments are also expected to rise by 2.8%, to reach Dh28.2 billion in 2016.

Nonetheless, challenges remain. During the first two months of 2016, hotel occupancies remained almost flat in Dubai, compared with a year earlier, at 84%. Increased competition and the strength of the dollar pulled down average daily room rates from US$272 to US$237 during the period.

Furthermore, lower energy prices and the depreciation of the Russian rouble and euro against the dollar, are making the UAE a more expensive destination for Russian and European visitors. This is putting pressure on corporate performance in the hospitality sector.

The real estate sector constitutes one of the main pillars of the UAE government’s diversification strategy. In Dubai, preparations for World Expo 2020 are acting as a catalyst for growth in the construction sector. “Despite lower energy prices, Abu Dhabi and Dubai will continue to invest in infrastructure projects which could attract private developers to the area”, said Seltem Iyigun.

Although the outlook for construction remains positive, the wider economic slowdown is weighing on the sector. The residential market across the UAE remained lower than in recent years. A total of 7,800 residential units were delivered in Dubai during 2015, compared with the scheduled delivery of 25,000 units estimated by developers at the start of the year.

Trade sector: investment ties between Africa and the UAE strengthening

Huge investments in infrastructures have resulted in modern ports and airports that are among the most attractive gateways to the Gulf Cooperation Council region. Dubai’s ports alone handle close to 55% of cross-GCC trade.

Growing trade within the GCC and with Africa is also supporting the development of the trade sector in the UAE. Gulf States are investing heavily in construction, infrastructure and the service sectors, in order to diversify their economies away from oil and gas. According to the IMF, the UAE’s total value of trade with Africa and the Middle East rose from $56.7 billion in 2010, to US$82.8 billion in 2014. Investment ties between Africa and the UAE are also strengthening. The Federation, particularly Dubai, accounted for 6% of total capital expenditure on greenfield-related FDI projects in Africa in 2014. India, China and Japan are among the UAE’s largest Asian trading partners, while China and India alone account for nearly one quarter of total UAE trade. 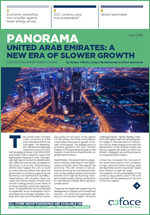