Wine production in Europe – a blend of quality and quantity

The world’s wine production is dominated by Italy, France and Spain, who together account for 48% of the total. Each of these three countries has its own production model. These coexisting models are based on complementary ‘product positions’, clearly identifiable through their export structures.

French market positioning is based on the creation of value. Its quality ratio (the relationship between export value and volume) is respectively two and five times higher than those of Italy and Spain. Italy has an intermediary position that is growing towards the qualitative model. Italy’s increase in its quality ratio is similar to that of France (240% for Italy compared to 250% for France, between 2001 and 2014). For all three countries, crop surface areas are declining (-12% in France, -20% in Italy and -18% in Spain), in line with the downward production trends linked to restructuring. Nevertheless, Spain’s crop surface area remains, on average, 35% higher than those of its neighbouring countries.

While Spain became the world’s leading wine exporter, in volume, in 2014, it has the most vulnerable of the three models in terms of competition from the new world. This is due to the low and mid-level positioning of its product lines.

The rankings are being turned upside down, with China and United States to become the world’s leading consumers in 2027 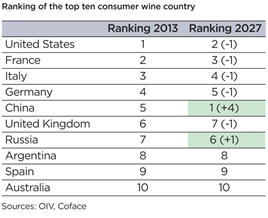 France’s position as the world’s leading consumer of wine (with 43.8 litres of wine per year, per person in 2013), is beginning to level off. European wine consumption is also declining (down by 17,000 hectolitres between 2003 and 2013). Coface forecasts that by 2027, the highest demand will come from Asia. The popularity of wine in China is expected to accelerate, thanks to its growing middle class population, which could increase threefold by 2022. Wine imports are expected to rise sharply to meet demand. Over the past six years alone, imports have totalled some 1.8 billion dollars and 238,000 additional tons of wine.

Currently the three leading European producers account for two-thirds of wine exports, in terms of value and volume – but will Europe, faced with rising competition from the new world, be able to retain its leading position in wine trading?

While the traditional exporters are resisting, production in Europe (with the exception of Spain), is on the decline. The free-trade agreements between China, Australia, Chile and New Zealand give advantages to their wine exporters, which are now exempt from taxes. This means that traditional exporters face increased competition on the low and mid-level market place. Furthermore, the lower exchange rates in Chile and in South Africa are strengthening their price competitiveness. The African market still has a low level of wine consumption but is considered to have strong growth potential, while the potential for Asia is even higher.

“There are numerous winegrowers in Europe. Despite their small sizes, they have sound, high-quality structures. This is confirmed, for example, by the fact that in France company failures are rare”,commented Guillaume Rippe-Lascout, economist at Coface.“At this stage, European producers, apart from in Spain, are not suffering from the new world competition on low and mid-level products. While the qualitative position of the old continent has not yet been called into question, the time has come to identify growth areas for export and to optimise risk management.”